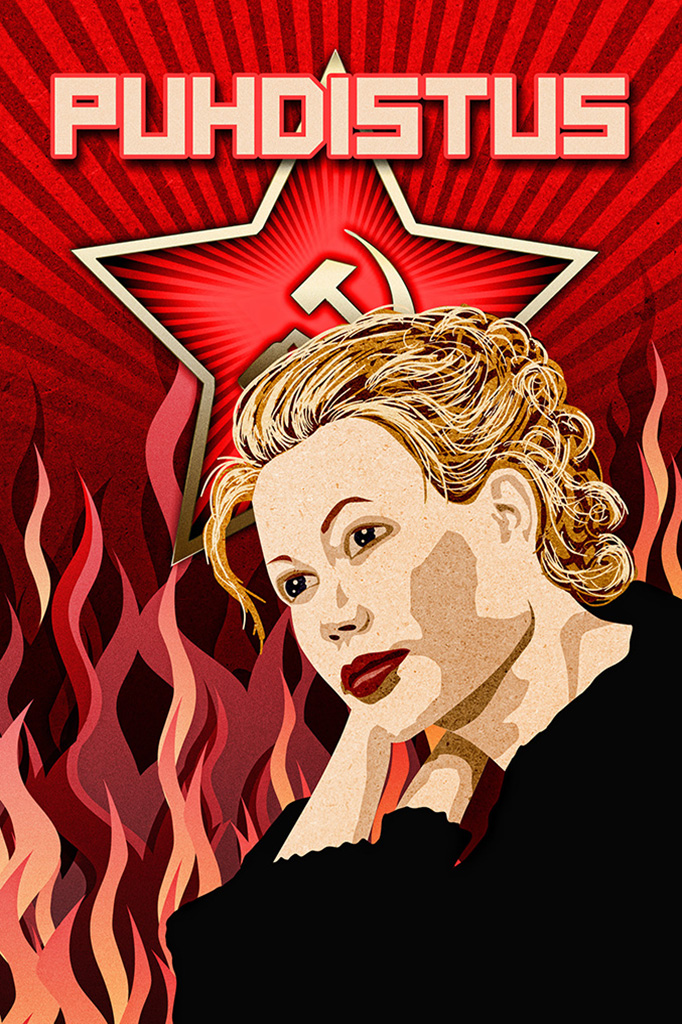 Purge had its world premiere at the Finnish National Opera on 20th April 2012. The opera takes on the history of aftermath of WWII and modern human trafficing and has earned praise in the Finnish media as well as the international press.

The authors of the opera have created a perfect match of literary work and modern opera, witnessed by the audience, who at the premiere remained in revered silence for an entire minute after the performance had ended. Purge centres on the the times of bloodbaths in the Soviet Union and traces the tales of two women in parallel. Their fate is the fate of the nation. In the story, the encounter of the older woman, Aliide, and young Zara, leads to the revealing of the two women’s harrowing pasts and also the history of Estonia moving back and forth from the 1930s to the present day. The theme of modern day slavery and human trafficking becomes the subtext to the opera.

Jüri Reinvere’s score, at once suggestive, expressive and dramatic, achieves an effect where the stage seems to mirror an entire society, filling the stage and creating intimate moments. His musical language is modern, but the focus on gripping story-telling makes Purge a classical opera. Reinvere has also written the libretto. “I emphasise Estonians coming to terms with the past. I claim that the past can only become the past when we have faced it eye to eye,” says Reinvere.

Reinvere wanted to pay homage to classical opera and complete the most important arias. This opera is very challenging for the singers – both the soloists and the chorus. The part of the main character Aliide requires a range of two and a half octaves. Additionally Reinvere uses documentary soundscapes, e.g. original sounds of American Studebaker-cars, which the Soviets used for the deportation of people to Siberia.

“It was important that Purge was made an opera from beginning to end.” says the composer. “It cannot be an illustration of the book or the play. It has to work as the most classical operas work together, like Dumas and Verdi, for instance” and adds: “opera has a strange skill. It is simultaneously the truth, and more than the truth. By telling the truth of the past, we can understand finally the present, both in ourselves and in the music, which we are surrounded by”.
Watch Trailer

“The most important thing to have been written for a long time Jüri Reinvere’s Purge probably belongs among the most important operas ever premiered at the Finnish National Opera. …With its story of treachery, persecution, blackmail and bitterness, deportation, prostitution and families torn apart, it is a work that comes close to the viewer. The fact that everything is played out in a nearby country in modern times gives the story extra weight. … The ending may be interpreted as a reference to Brünnhilde’s farewell at the end of Götterdämmerung, but without the pathos and the naïve faith associated with Brünnhilde. All that remains on the stage in Purge are the grave candles. And the silence when all has been said.”

“A Purge worthy of homage Sofi Oksanen’s Purge is already a novel that has won many prizes, a play in many version, a soon-to-be released film and now an opera at the Finnish National Opera in Helsinki. In substance, Purge has a lot in common with Shostakovich’s opera Lady Macbeth of the Mtsensk District – the sorely tried Aliide can both cook mushrooms and murder. Oksanen tells of three generations of women, all the victims of sexual degradation. … Reinvere contrasts the sensitive and subtle with brutality …he borrows the final scene from Wagner’s Götterdämmerung, where Brünnhilde ascends the pyre she has herself set fire to. Before Aliide sets fire to her house, she prophesies that a deluge will clean the land. The chorus, which makes an impressive contribution during the evening with shushing, fluttering consonants, places a row of burning candles along the front of the stage and bows in homage. And so do I.”

“Deft choices in the Puhdistus opera In writing his first opera, Estonian composer Jüri Reinvere has made a number of deft choices. Sofi Oksanen’s 2008 novel Purge contains all the right elements for the big stage: love, jealousy, betrayal, violence, memory, regret. The book has been a runaway international success. Oksanen paints Estonian history in compelling shades of grey. Her characters make all the wrong choices for all the wrong reasons in a world where survival has become its own end. Adapting a great book for the opera stage is a risky bet, and plenty of composers get it wrong… Mercifully, Reinvere makes no attempt to set the book to music; his Purge is much more a musical reflection on Oksanen’s characters. He has completely deconstructed the story and created a series of fragmentary confessions. As an opera, Purge is unashamedly traditional in form and construction, with arias, ensembles, choruses, and the full weight of a 20th-century symphony orchestra. Reinvere lets the strings scamper and the percussion thud to indicate fear and danger, and vocal lines soar with love or yearning. But he stops short of literalism. When guards lead the women off, there is an abrupt dissociation, and the strings float off into a dizzy trance. By putting us inside a mind that shuts off in self-defence at the onset of brutality, Reinvere tells us more than any amount of thrusting orchestral violence ever could.”

“A moving, harmonious entity When Jüri Reinvere’s opera Purge had ended, a long silence ensued in the hall. The moving story of how Estonia got caught up in internal savagery and its shocking final scene were the cause of this. Having recovered from the shock, the full house burst out into ecstatic applause and shouts of Bravo. The new opera was a success. … The orchestra plays a big part. It carries the text along and gives it depth in the spirit of Wagner. In the composer’s words, it is an invisible alien force. …Puumalainen’s direction was extremely rich in ideas and successful. She moved her crowds around effectively and brought life to the stage by small-scale means. The best opera direction I have seen in a long time! …The magnificent, ingenious stage design of Teppo Järvinen deserves a special mention.”

“A tour de force of music theatre Purge is a tour de force of music theatre. Jüri Reinvere has, as composer and librettist, heightened and brightened Sofi Oksanen’s novel as poetic theatre in a landscape of sound. It is not opera in the traditional sense; it is a hysterical account of life forced to live a lie. Reinvere’s idiom has a kinship with that of Alban Berg. The frame house at the heart of Teppo Järvinen’s stage design bursts into flames at the end. The sight is an unbelievable triumph of pyrotechnics. Visually, Purge marks the climax of the theatre year.”

“Purge opera shocks and bewilders Jüri Reinvere grasped that the pitiful Estonian survival story charged with suffering, torment and horror has all the ingredients for a powerful opera. … Purge rises strongly above the concrete individual level, also as the sad symbol of the fate of a whole oppressed nation.”